Right to Information and Public Accountability

One of the basic tenets of democracy is the ability of the people to determine how they should be governed. The modalities of self-government are many, but by and large most democratic countries in the world have adopted one form or another of representative democracy. This involves the people collectively, or in different groupings or geographical segments, electing representatives who are then expected to interact with their constituencies and represent their choices at the various levels of governance.

In such a reality, which transcends any specific political party, the people of India has to find other, innovative, methods of being heard and of influencing governance. But in order to do that they need, as a minimum, access to reliable and timely information regarding the decisions taken or being taken by the government, the basis for these decisions, the options available, and the safeguards and supervision being applied. Secondly, where they do not agree, or have serious doubts, decisions and practices of the government, they must have methods by which they can vocalise these disagreements and doubts, and publicise them.

The National Right to information act, enacted in 2005, was intended to fulfil the first of these needs and give access to public about information related to governmental processes, decisions, actions and inactions. The Indian RTI act was widely hailed, and rightly so, as 1 of the strongest transparency laws in the world. It was also unique in that it was drafted by members of the public and lobbied for by various people’s organisations. The documents included here give a detailed account of the formulation of this law.

Unfortunately, its implementation has been compromised because of various problems, mainly unsympathetic information commissions and an unresponsive bureaucracy. There are at least three reports included here which document the problems with the implementation of the law.

A method developed by various people’s organisations collectively access critical information and to publicly discuss it actually preceded the enactment of the national law. The passing of the RTI act made this significantly more effective and it acquired the name of “social audits”. These social audits, as can be seen, were not only methods by which information was collected both from the government and from the affected people, especially at the local level, but also provided a forum where this collected information was publicly discussed in the presence, and with the participation, of concerned officials and others relevant functionaries.

1. Detailed report of the 2008 assessment of the implementation of the RTI Act.
2. Report of the public hearing related to the Maheshwar Dam.

Documents under Right to Information and Public Accountability 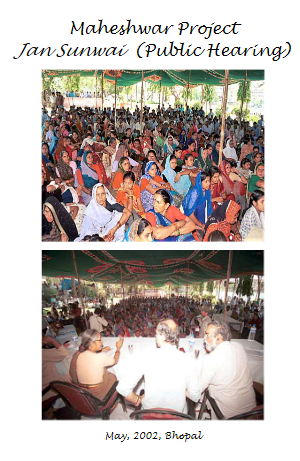 2002 - Report of the Bhopal Public Hearing on the Maheshwar Project 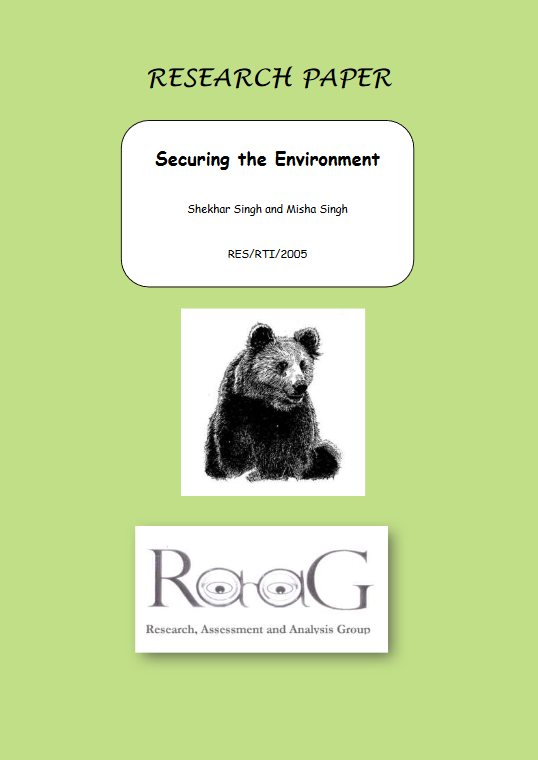 Scripted in 2005. Shekhar Singh was then convenor of, and Misha Singh a researcher
with, the National Campaign for People’s Right to Information. Download 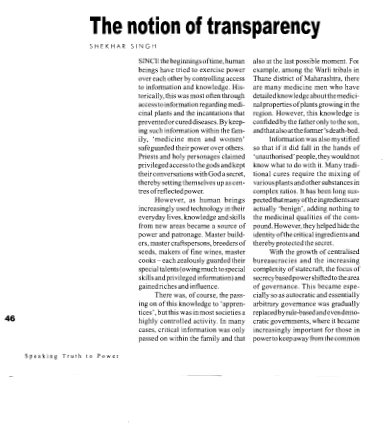 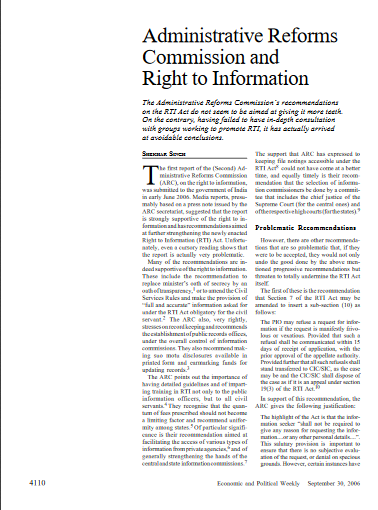 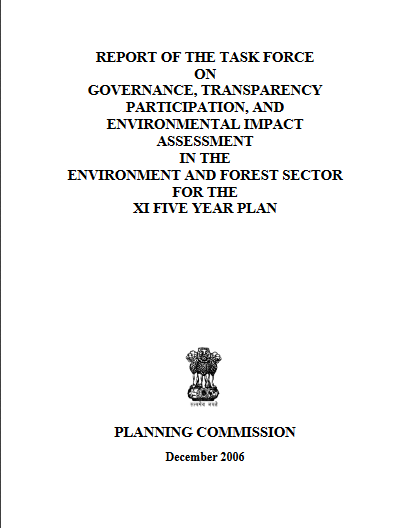 2006 - Governance, Transparency, Participation, and Environmental Impact Assessment
in the Environment and Forest Sector

Report Of The Task Force On Governance, Transparency Participation, And Environmental Impact
Assessment In The Environment And Forest Sector For The XI Five Year Plan Download 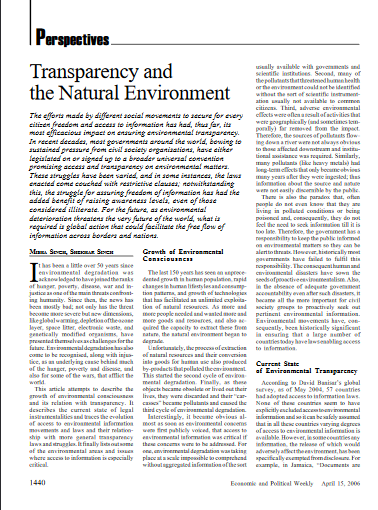 2006 - Transparency and the Natural Environment 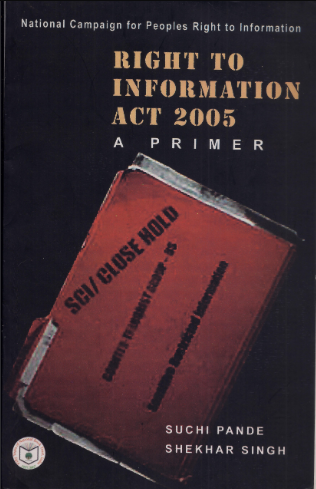 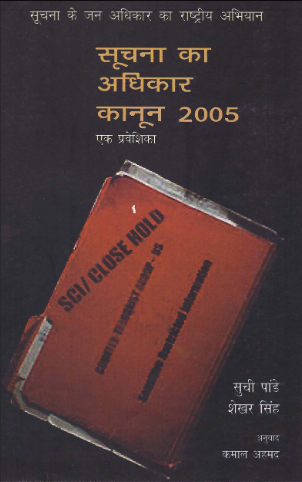 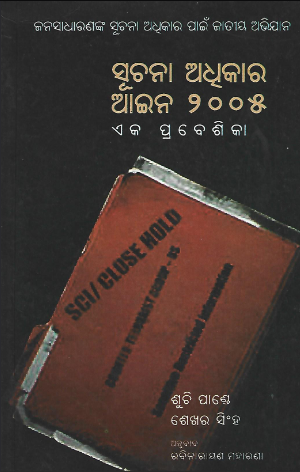 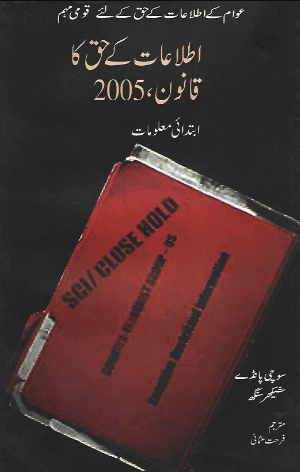 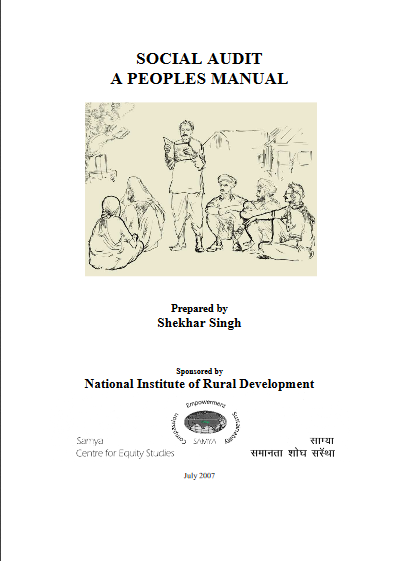 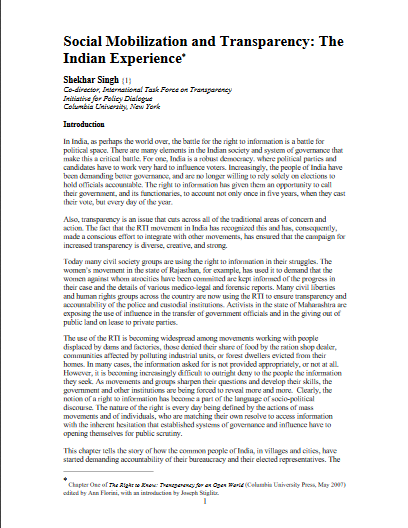 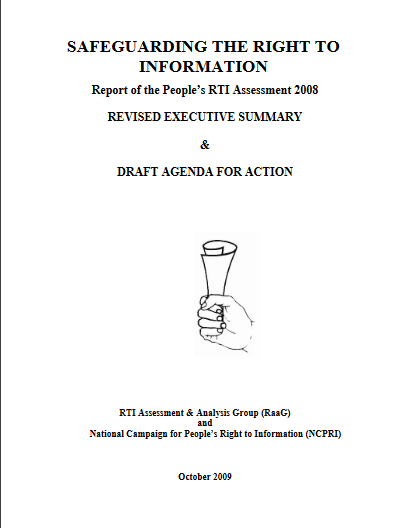 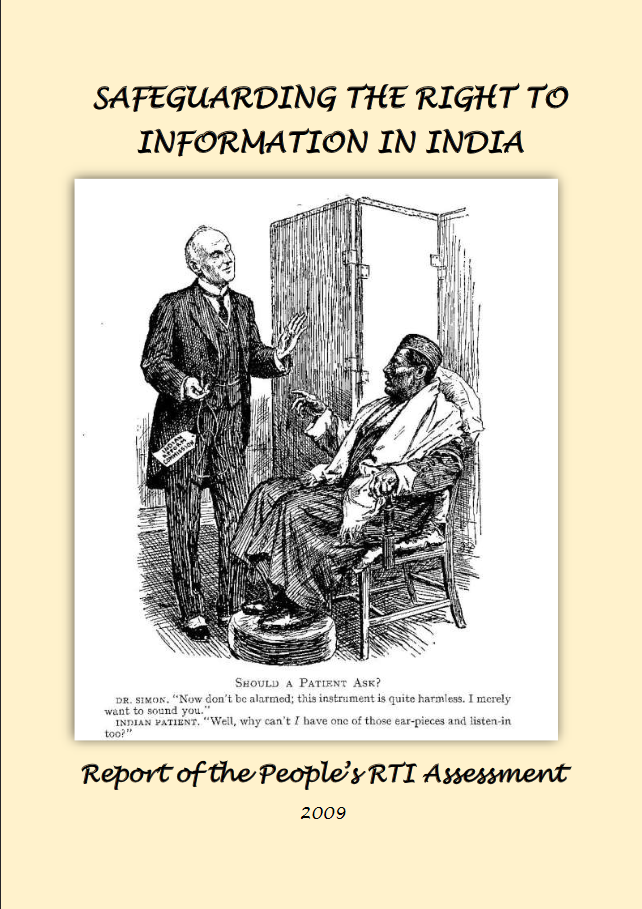 2009 - Safeguarding the Right to Information in India

2009 - Safeguarding the Right to Information in India : Report of the People’s RTI Assessment 2009 Download 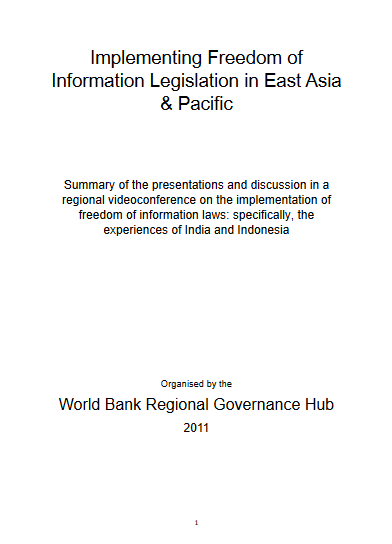 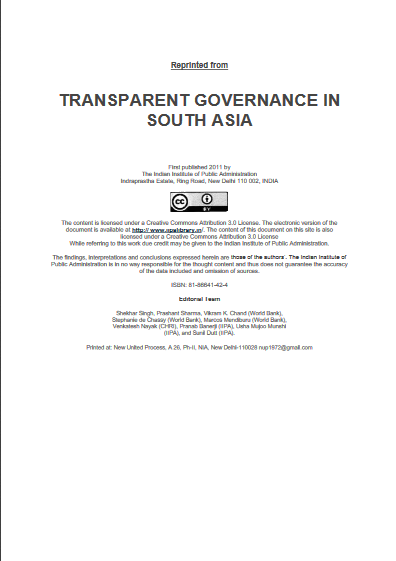 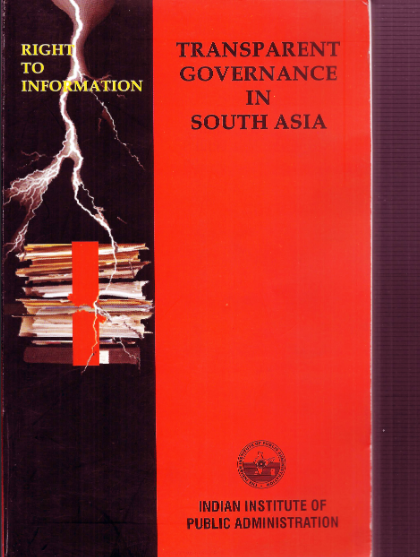 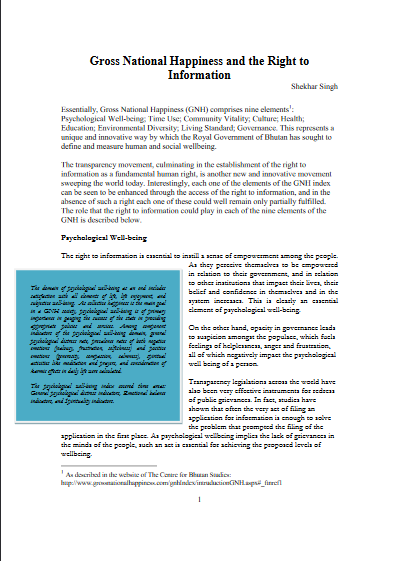 2011 - Gross National Happiness and the Right to Information

2011 - Gross National Happiness and the Right to Information Download 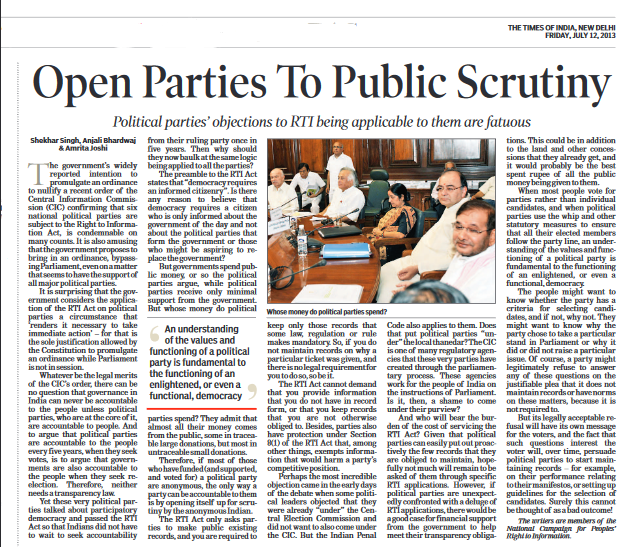 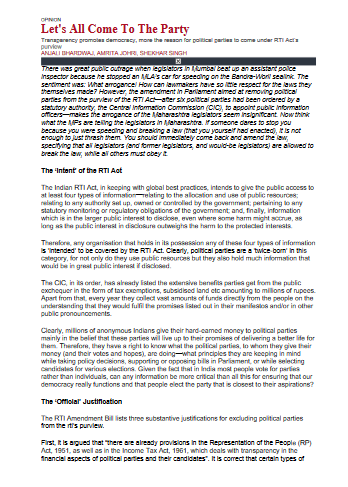 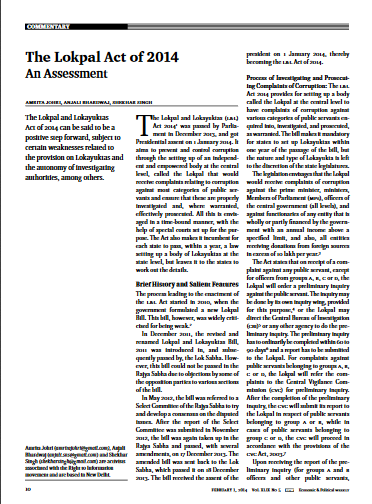 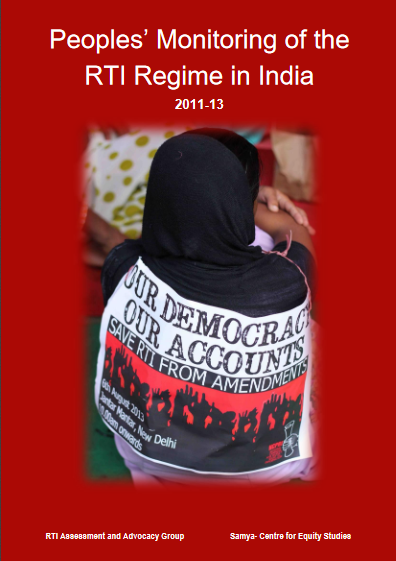 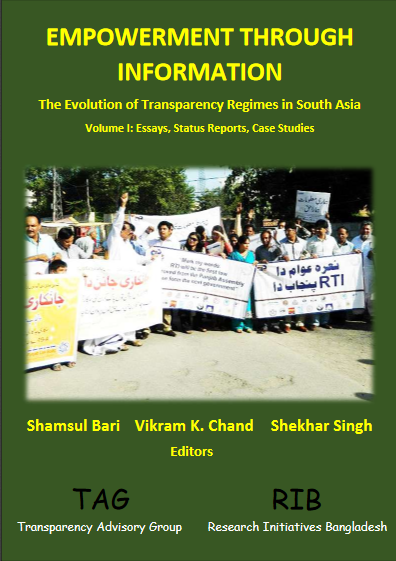 2015 - Empowerment through Information - Volume - I 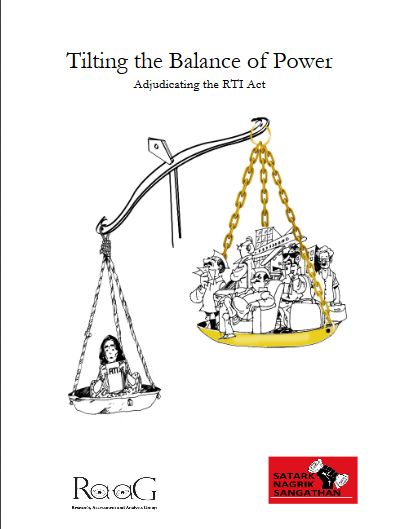 2017 - Tilting the Balance of Power - Adjudicating the RTI Act

2017 - Tilting the Balance of Power - Adjudicating the RTI Act Download