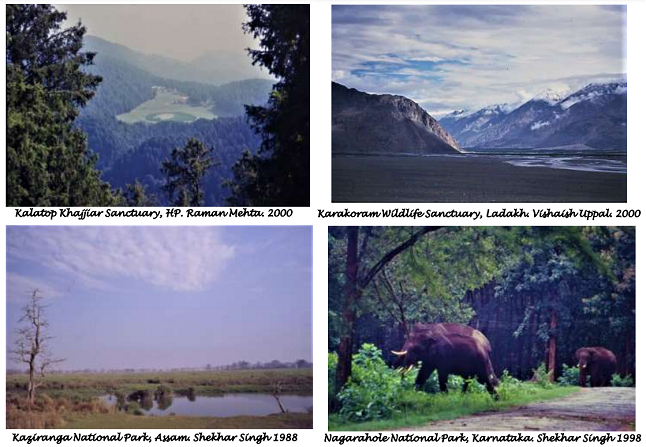 A retrospective, nostalgic, tribute to the researchers and environmentalists involved in recording the profiles and details of the management status of national parks and sanctuaries in India.
Between 1984 and 2002, a team of mostly young (and some not so young) wildlife enthusiasts and researchers studied the wildlife protected areas in India and initially produced a series of directories and an assessment of their management status and, from 1993, a series of ecodevelopment plans and discussion papers. For many of us this became our enduring, if not our main, research passion during these years.

We mostly worked out of the Indian Institute of Public Administration, New Delhi, in close association with the voluntary group Kalpavriksh. Most of the team members were either already, or soon became, members of “KV”, as it is popularly known.

In the early years, there was also a robust association with the Bombay Natural History Society, mainly through Dilnavaz Variava, who was the initiator of this genre of wildlife management research in India. In fact, it was she who was originally commissioned, in the early 1980s, by the erstwhile National Committee on Environmental Planning (NCEP), Government of India, to undertake a survey of national parks and sanctuaries in India. As a precursor to the proliferation of reports and iscussion papers, she and I put together a directory of national parks and sanctuaries in India, in 1985. Copies of this mimeographed document were circulated at the 25th session of the IUCN Commission on National Parks and Protected Areas (CNPPA), held in the Corbett National Park, in early 1985. It briefly described each of the 300 NPSs existing then in India: consisting of 53 national parks and 247 sanctuaries. Though I am a co-author, the lions share of work was done by Dilnavaz. To modify a famous expression: she was the lioness and I just had the privilege to roar along with her…

Dilnavaz and I also worked together, along with Ashish Kothari and Pratibha Pande, in researching and drafting the first of the management status reports, in 1989. Unfortunately, mainly because she lived in Mumbai and had a host of other responsibilities, Dilnavaz could not, much to our loss, keep up her active association with the work that she had initiated.

Apart from Dilnavaz, the two other leading lights in this somewhat new and innovative approach to studying wildlife management in India, were Ashish Kothari and the late Pratibha Pande. Ashish was the master of all trades and more than ably ran much of the project. Pratibha, apart from livening up our daily life in her inimitable cheerful style, was an avid wildlifer and birdwatcher, and an exceptionally talented artist, as witnessed by her numerous sketches illustrating the directories. 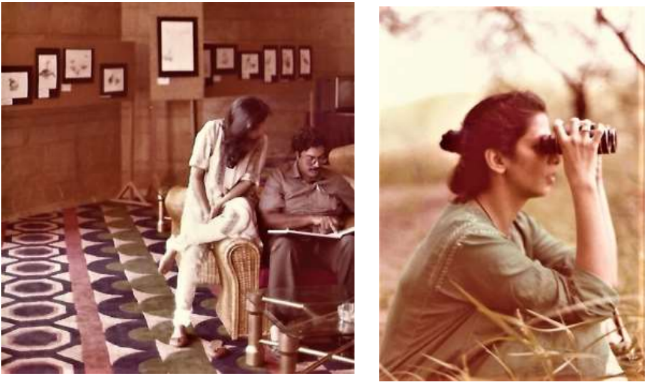 Extreme left-Pratibha exhibiting her paintings at the Kanishka Hotel, New Delhi (early 1980s). Left - bird watching in Sultanpur (early 1990s)
She was involved in developing and drawing the maps for these publications, a task in which she was ably partnered by Raman Mehta. Raman was also our inhouse computer expert. He was mostly responsible, in the mid-1980s, for teaching all of us how to use computers: PC XTs and Word Star to start with, and worked hard to help Ashish overcome his initial dislike and suspicion of computers.

Some of the other enthusiasts and researchers, without whose involvement this work would never have been done, included Amita Bedi, Anita Lal, Farhad (Bingo) Vania, Jaya Menon, Joanne Carneiro, Maneka Singh, Pallava Bagla, Pallav K. Das, Ranjit Lal, Rupa Desai, and Sunita Rao, among many others.

In early 1990s some new researchers joined the team, with fresh perspectives and different working styles. These included senior members like Vasumathi Sankaran, the senior most among us in age, and a geographer to boot, Tara Gandhi, a biologist and ecologist, and Nandan Maluste, who was director of a leading advertising agency in Mumbai, till he joined the IIPA team,.

To me, personally, apart from all of them, great support came from Theodore Baskaran, who first educated me, in the mid-1970s while we were both in Shillong, about the finer points of wildlife management, and fuelled my enthusiasm for bird watching. I still have painful memories of driving my jeep through the forests of Meghalaya, Mizoram, and Nagaland, with Baskar sitting next to me on the front seat. Every time he spotted a bird, or heard a birdcall, he would excitedly squeeze my arm hard till I braked and allowed him to jump out and focus his binoculars on his feathered friend. Those were long, painful, but educative drives and I consider Baskar to be the foremost of my environmental gurus.

Soon after I shifted to Delhi, in 1980, I met W.A. (Alan) Rodgers (tragically now deceased), who was an FAO consultant with the Wildlife Institute of India. He then took up from where Baskar had left off. Alan was a trained biologist who had also managed wildlife protected areas in East Africa before becoming an FAO consultant in India. 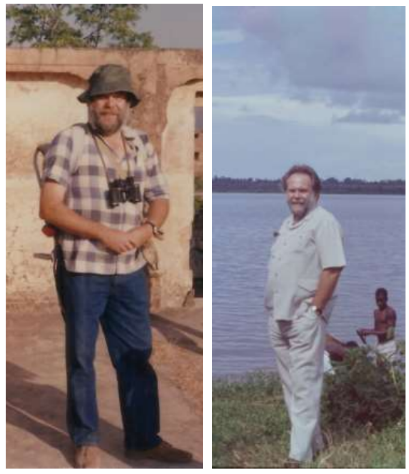 Photos on left: Alan in Rajasthan (late 1980s) and on the banks of Lake Victoria, Uganda (early 1990s).
For the next decade or so we travelled many parks and sanctuaries together, and he taught me much about ecosystems and how they needed to be conserved. He was also a keen student of the social and administrative factors that impacted wildlife conservation, and we spent many hours discussing these. He critiqued our various draft reports and I still have copies with his comments in red ink, in a large not-to-be-missed handwriting. Having had a scientific education, he believed in certainties and “facts”, while my background in philosophy made me much more tentative. Therefore, I often prefaced my findings and conclusions with “I think” or “I feel”. I still remember receiving back one such draft, which perhaps had too much “tentativity”, with his large handwriting scrawled across the page in red: “We must stop Shekhar Singh from feeling around so much!!”

Though perhaps now of only historical interest and value, these publications represent a research genre which no longer seems to be popular. Therefore, the least one hopes for is that by circulating these volumes now (especially when many people have time on their hands to read low priority things), someone will get provoked into taking up the challenge and re-examining the status of these protected areas, as they are today, thereby giving us an idea of trends over time and prospects for the future.


Documents under Conservation of Wildlife 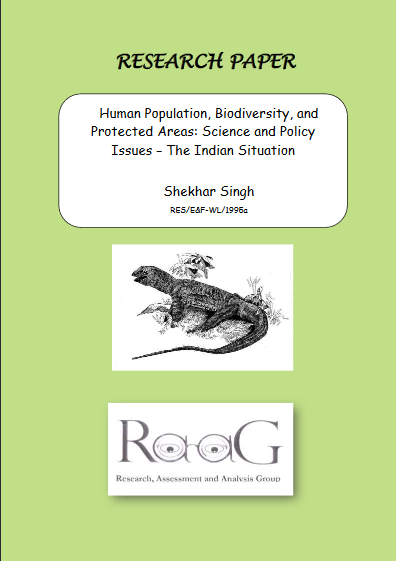 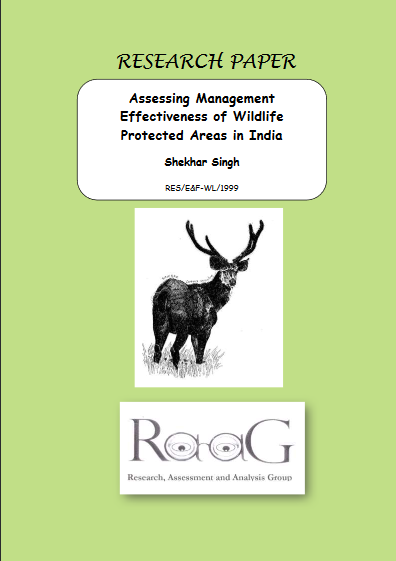 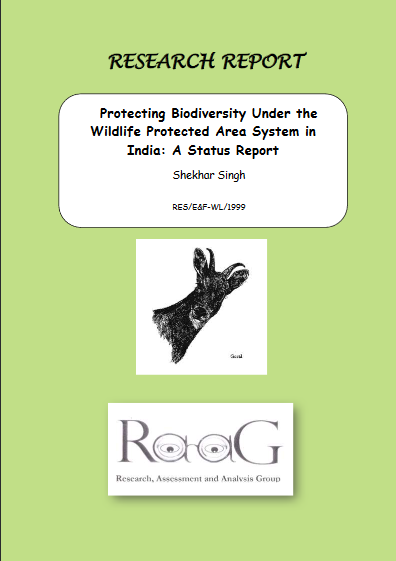 1999 - Protecting Biodiversity Under the Wildlife Protected Area System in India: A Status Report 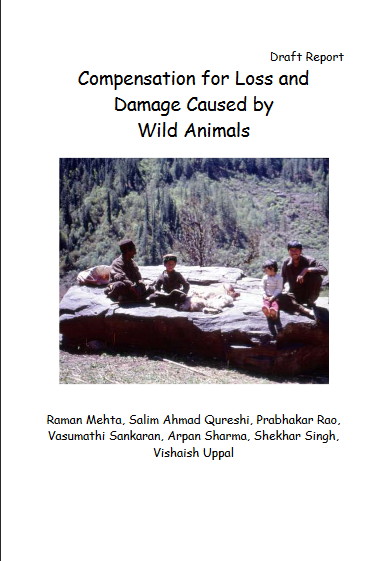 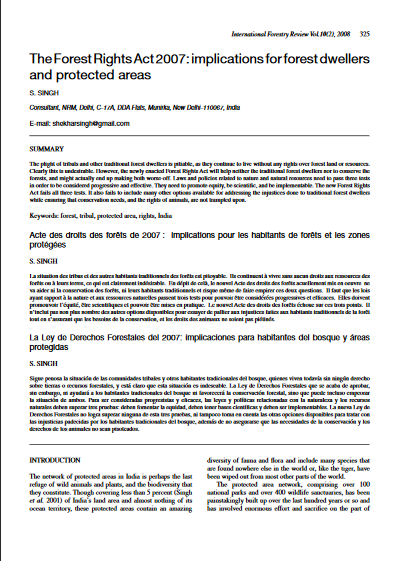 
Conservation of Wildlife :
Relevant Unpublished/Out-of-print Documents by Other Authors 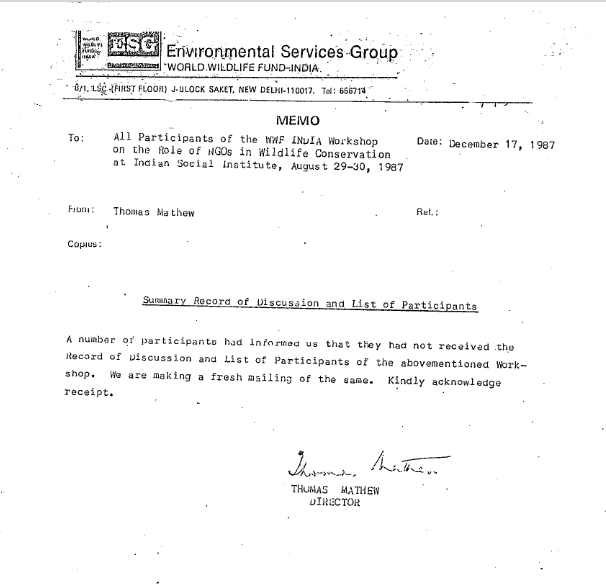